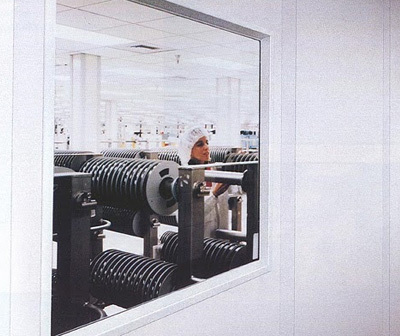 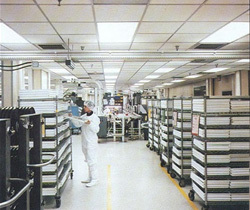 Tape manufacturing requires an ultra-clean environment and is a quickly changing industry with frequent modifications in production. So, when Ampex needed to expand its existing cleanroom manufacturing area in its Opelika, Alabama facility, the company had two major concerns: quality and flexibility.

Ampex Associate Engineer, Steve Erlandson, set out to find a wall system that would meet his cleanroom needs. Since flexibility was a major concern, he immediately ruled out the conventional construction methods that Ampex had used in the past and began searching for a modular wall system that could be modified or expanded quickly and easily.

After investigating a number of modular wall systems and touring a nearby plant outfitted with PortaFab cleanroom systems, he decided that PortaFab could best serve his needs for quality and versatility.

"PortaFab's non-progressive construction offered more flexibility than other modular systems," according to Erlandson.

Installation of the walls, ceiling, and floor was quick and easy, according to Erlandson. The project remained on schedule throughout installation and plant disruption was kept to a minimum.

Because Ampex's products are continuously improving and changing based on market needs, the manufacturing process was continually changing. These production changes often required modifications in the cleanroom environments including relocating equipment and reconfiguring the conveyors that ran through the walls of the cleanroom.

Since individual PortaFab wall panels could be moved quickly and easily, these changes in the production process did not cause disruption, downtime, productivity loss, or dust that normally accompanied conventional construction.

Overall, the 30,000 square foot cleanroom expansion was considered a tremendous success. Ampex was so pleased with the attractive appearance and low maintenance of the PortaFab wall system that they utilized the same wall panels to enhance other areas within the class 100 cleanroom facility.